Far Lands is an awe-inspiring personal illustration project by Artem Chebokha (previously), a Podgorica, Montenegro-based digital artist. She took inspiration from the American March to the West and extinct ancient civilizations to create this series full of powerful and ethereal scenarios.

For several years I wanted to come up with a coherent series for myself, in which I could implement some of my ideas, combining the concept art of locations (and characters maybe) and illustrations, experimenting with media and getting new experiences. And at the same time also tell some story. I wanted to create a world that I Could explore, travel in and learn something new for myself. These are the first works from such a series, which I called “Far lands” In short, this is a story about explorers, scientists and enthusiasts, pioneers of unknown lands filled with a certain mystery of antiquity. The ruins of civilizations lost in eternity and strange natural phenomena, horroble Creatures and just beautiful places. The conditional time of action is the 1910s. Welcome to “Far lands”. 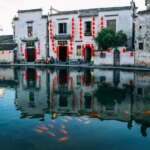 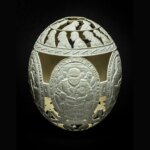